“Finance and Stochastics” at 25 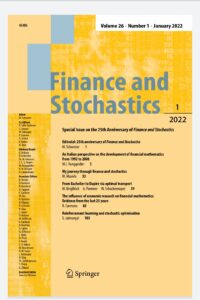 The journal Finance and Stochastics has now been publishing for a quarter-century.

The germ of the idea for its inception came at just the right time. The entire project was carefully and circumspectly planned, discussed and agreed step by step among all the stake-holders. It was carried along by conviction, enthusiasm and dedication and its very first volume included articles that became significant markers in the literature and have remained highly cited many years later. Since then, it has gone from strength to strength under the guidance of its Editors and its regularly renewed Editorial Board.

A special anniversary issue, the first of Vol. 26 (2022), has appeared. It looks, through several articles by distinguished proponents of the subject, at the evolution and growth of the journal – and at the same time of the field – and inspects its future foreseeable directions. A summary is provided in an Editorial by current Editor-in-Chief Martin Schweizer. Read it here.

Read the entire issue here, or the individual articles here: